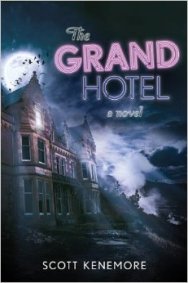 For today’s Coffin Hopping, I’ve got a special treat for you! Bestselling author of Zombie, Ohio; Zombie, Illinois; Zombie, Indiana; and The Zen of Zombie, Scott Kenemore, is here to talk about Halloween, zombies, and his latest book, The Grand Hotel, which is available now

! Run, don’t zombie-walk, to grab yourself a copy (Trust me: I read it, and it’s amazing).

And now, the interview…

Joanna Parypinski: Hi, Scott. ‘Tis the season for horror (and Coffin Hopping!). With that in mind, what’s your favorite thing about Halloween?

Scott Kenemore: I just like the way Halloween makes me feel. October is a great time of year. I think starting school in the fall trains us to feel like that season is always “the beginning of things” for the rest of our lives, even if we’re no longer students (or teachers). And who doesn’t like hay rides, haunted houses, and ghost story telling?

JP: Agreed. Let’s talk zombies! Zombies have become extremely popular in contemporary media. What is it about them that you find most scary or compelling?

SK: I like how zombies occupy a strange spot in our brains so that they feel “friendly” and “unfriendly” at the same time. When your sister comes back as a member of the walking dead, she’s somehow your sister and not-your-sister at the same time. Zombies can be very human and relatable, but concurrently repulsive and exotic and “other.” It’s an odd and unique effect. Sigmund Freud has a great essay called “The Uncanny” about this sensation.

JP: Your Zombie series involves invasions in various Midwestern states (Ohio, Illinois, Indiana). What about these settings appeals to you? How important is setting in your writing?

SK: I like setting my zombie outbreaks in the locations where I’ve lived because I’m curious about how these places would handle the “stress test” that zombies create. Zombie, Illinois was set in many of the places on the south side of Chicago where I used to work in community development. The character of Leo Mack is based on a number of pastors I knew who managed large- to medium-sized congregations in high crime, low income neighborhoods. It was interesting for me to think about how the south side community would do in a zombie outbreak, especially compared to more affluent Chicago neighborhoods where people might be depending on security systems and police presences that wouldn’t be there anymore. A lot of films and books have already told the story of “zombies in the suburbs.” I wanted to cover some new ground.

With Zombie, Indiana, I was interested in examining the impact of zombies at the governmental level. In lots of zombie fictions, characters briefly interact with “headquarters”—or whatever remains of the government—but we never get more than a small taste of what it’s like for the people who are trying to keep order and run things. In Zombie, Indiana, I wanted to look at what it would be like for a high-level administrator when the zombies rose up. Accordingly, one of the main characters is the Governor of Indiana, and over a third of the book takes place in-and-around his “war room” at the state capitol.

With Zombie, Ohio, I was also interested in a new perspective—that of the zombie itself. In many mythologies, zombies are a virus. When I was formulating how this book was going to work, I was thinking about those real-life cases of people who contract a virus but never get ill, or don’t get ill to the same extent that others do. For example, I think it’s something like 1 in every 100,000 people who get HIV never get sick. They have HIV. They can give it to other people. But it never makes them unwell. I was interested in translating that to a zombie virus. What if there’s a guy who dies and is reanimated by the zombie virus, but unlike most zombies maintains almost all of his wits? What if he’s lost most of his memory, but wants to figure out who he was and why he died? What if he learns he was murdered, and decides to solve the mystery of who killed him and why?

JP: I think my favorite book of yours might actually be your latest non-zombie tale, The Grand Hotel, about a desk clerk who leads a group of visitors on a creepy tour of a mysterious, mouldering hotel. What was your inspiration behind this book? How did you come up with the idea?

SK: I’ve always liked collections of interconnected short stories… especially when the stories are interconnected without first seeming to be. I think the all-time best example of this is probably a novel called Betrayals by the British author Charles Palliser.

But the biggest inspiration definitely came in the form of The Five-and-Twenty Tales of the Genie, which I read in early 2012. It’s a story cycle arising out of the oral traditions of ancient India, and tells the tale of a king who has to solve riddles contained in 25 different tales in order to reach his goal. It was first put into Sanskrit by an author named Sivadasa around the year 1100, but its oral composition probably dates concurrent to the writing of Beowulf. Yet I feel like the stories in The Tales are written with a worldliness that makes them feel like they’re from the nineteenth century, not the ninth. The narrative voice is so charming and clever, and everything is done with a wink. It’s just lovely.

I think—as with most ancient texts—The Tales is, however, hampered by the fact that it was written for an audience with a very different set of narrative expectations. I suspect if contemporary readers were given The Tales with no historical reference, there’d be a lot of “Wait…why are you telling me this again?” and “So…what does this detail have to do with the main story?”

I have probably never been as creatively galvanized by a creative work as I was by The Tales. I don’t know if The Grand Hotel is a “retelling” or “reimagining” exactly —only a couple of stories in my book are adapted directly from it—but it is, at the very least, a powerful homage.

SK: I think it felt more like writing a novel because each short story was something that the characters in my frame-story were listening to, thinking about, and—in some cases—searching for clues in. In this way, I felt like that same group of frame-story characters was always present, always with me.

JP: Which of the stories in The Grand Hotel is your favorite? Why?

I think editing a collection of stories is like mixing an album. (I am also a drummer.) After a while, you’ve been over the stories/songs so many times that they all start to blur together in your head. You become unable to say which one you like the most, or which one feels the most interesting.

With an album, when outsiders listen to it, they can usually tell you right away which song should be the single. I had a similar experience with the early readers for The Grand Hotel. Most of them said their favorite was a story about strange happenings aboard a space shuttle mission. It’s actually a reworking of a very old, traditional American ghost story. I just updated it, and tried to add a couple of surprising twists. But there you go. I’m glad people feel I adapted it effectively.

JP: Anything else in the works—another installment in the Zombie series, or something new?

SK: I am working on a few different things, but mostly allowing myself to take it easy for the rest of 2014. I had two books come out this year. That was a lot of work!

JP: Thanks so much for doing this interview! I hope everyone gets a copy of The Grand Hotel for an excellent Halloween read.

Thanks for joining Scott and me in today’s Coffin Hopping! Don’t forget to enter my Halloween Mad Libs Contest. Voting for the best response starts on the 28th.