Under the Dome: Book vs. Show

Now that season one of CBS’s “Under the Dome” is over, we can look back to its source material—that 2009 tome by Stephen King—and see how the show sizes up against the original. King has stated that the show is not a direct adaptation from the book, but rather a parallel story in which the dome has a different explanation. Still, there are strong echoes of the novel throughout, from the main characters to that strange repeated line, “Pink stars are falling in lines.” To be honest, neither the show nor the novel knocked my socks off, but they were both passably entertaining distractions.

So which is the more successful iteration of King’s story about the small town trapped under a mysterious dome? To answer this, I had to ask a few questions: Which is scarier? Which has better writing? Which has more interesting and engaging characters? Which has a better storyline? A clear winner emerged.

I have to admit, the cow was pretty cool.

Though it’s not anywhere near King’s scariest work, I would still classify the novel as horror. The murders are gruesome. Drugs and religious zealotry play with reality and fear. Halloween plays a fairly prominent role. And there are some creepy moments of necrophilia.

The show, however, strays quite a bit away from horror. Even though it’s still a town (of some bad and psychotic people) trapped under a dome, somehow everything is just… so adorable. You know Junior, the crazy dude with wicked migraines who killed and then raped a couple of girls? In the show, though he kidnaps his girlfriend, we are somehow led to believe it’s only because he loves her in his own twisted way. Instead of images of burning and Halloween, they give us images of butterflies, mini-domes, eggs, and a surprising amount of pink. Way too much “pink stars are falling.” Quick, guys! Run away from the horror… of the butterflies…

Every time I tuned in to “Under the Dome” on Monday night, I ended up cringing at some of the sloppy, stilted writing. The characters all seem a bit dumbed down, telling us what’s happening on screen as if they have a constant need to explain reality to each other. Often they all agree upon a conclusion based on one person’s gut feelings, rather than clues or logical explanations. The show loses its attempt at mystery in too much vagueness… like when our group of heroes decides who their leader must be (the “monarch” from the dome’s inane message, “The monarch will be crowned”) based on the flight pattern of a special undead butterfly…

King’s logic in the book, on the other hand, is a little more solid. The book explains more than the show, but of course the show has been left deliberately at a critical moment to get the viewer to tune in for season two. Though there is a lot more depth in the book, to arrive at that depth King had to write a seemingly-endless 1,000-page narrative that ended up being overlong, overdramatic, and kind of a drag. 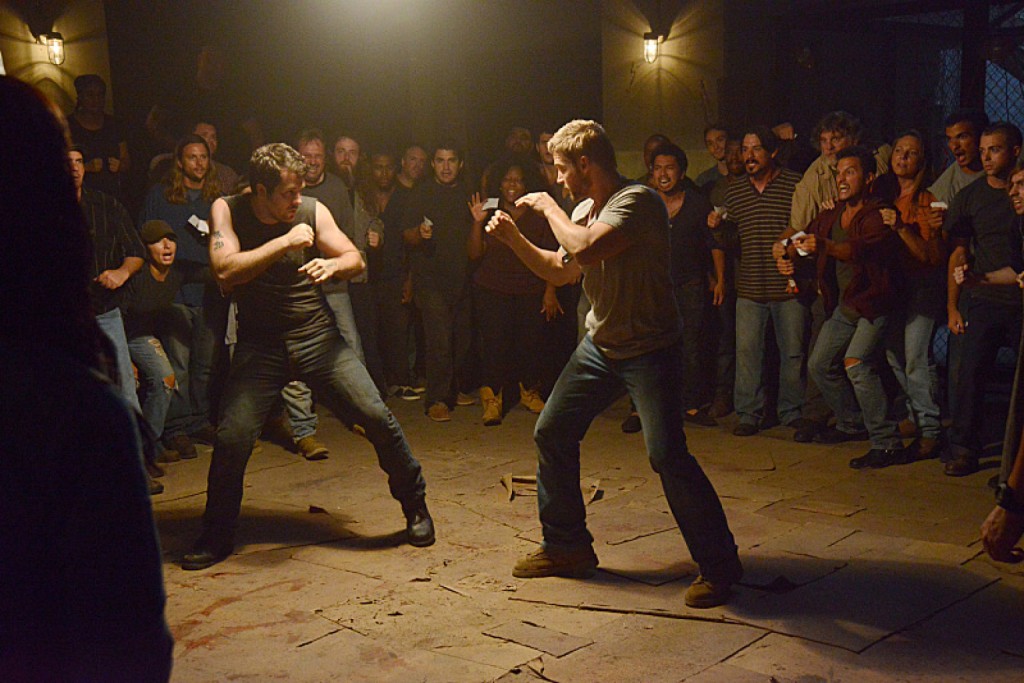 The show writers decided there would be a spontaneous fight club for an episode. So there was.

The book’s characters are more fleshed-out than the show’s version, due mainly to the extended character study and backstory. Some characters, like Junior and Big Jim, are much creepier and more psychotic: forces of evil that cannot be persuaded to back down. Barbie is much more than the pretty face on the show. Julia, unfortunately, is just about as annoying as she is on the show, thanks to her silly story about getting her pants pulled down in second grade, and how that somehow changed her as a person.

“I just… don’t understand why I have to be called Barbie.”

The show’s version of the characters are mostly awkward and wooden. Even Dean Norris (Hank from Breaking Bad) who plays Big Jim can’t quite salvage the show’s muddling of his character. The child actors (including goofy Joe and whiney Norrie) say everything so emphatically. And of course Junior isn’t the twisted necrophiliac he is in the book.

When I was watching the show, I often ended up thinking to myself: what the hell is going on? For some reason, there is a mini-dome with an egg inside, and only four specific people can touch the mini-dome without getting shocked, and a butterfly makes the entire dome turn black, and pink stars shoot out of the ground when Julia throws the egg in the water, and why is any of this happening? The finale offered no answers. I still have no idea what’s going on.

The book was much less focused on the fantastical elements that baffled me above, and instead provided tense, frightening, and even harrowing scenes (I just remembered that awful gang-rape scene…) depicting people reacting badly to a crisis situation. Though I found these scenes more interesting than the ones in the show, the overall story was too long and puttered to a lame and predictable ending.

Obviously if I were to pick which incarnation of Stephen King’s Under the Dome is better, my choice is the book. That’s not saying a whole lot, though, since I found the book largely unsatisfying. Here’s to hoping King’s next offerings, both in literary and visual forms, will exceed the mediocrity doled out by both versions of the story of Chester’s Mill.