All I knew of this movie was that it had something to do with black holes, took place in outer space, and was horror. It sounded to me like the makings of a good movie, considering the kinds of mystery you can explore through the universe’s most mysterious object.

An event horizon, for those who were never astronomy geeks like me (I wanted to be an astronaut when I was eight), is the radius around a black hole at which nothing can escape. It is the point of no return. Once you reach the event horizon, you’re going into that black hole, and nothing’s going to stop you.

The concept of the movie lived up to my expectations: a ghost space ship is trapped on Jupiter’s atmosphere, the crew mysteriously missing after it traveled through a portal via a manmade black hole. Awesome idea? I’d say yes. Then they discover that the portal went beyond the edges of their universe, taking them outside of normal space-time into a place of pure chaos: Hell. And when the ship came back from Hell, it brought some of it back with it. Super awesome idea? Hell yes.

This provides us with lots of possibilities for creepiness, and we get some nice moments of gore (i.e. people ripping out their own eyeballs). The ship is also a spectacle in itself: it is gigantic and was designed to look eerie and futuristic. Unfortunately, that’s about where the awesome ends and the clusterfuck begins. 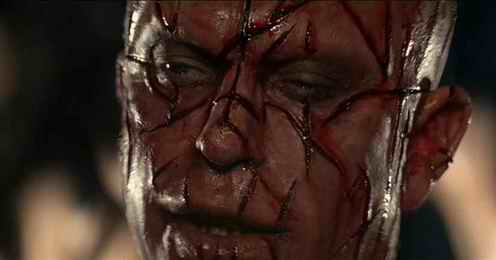 What disappointed me most about this movie was that the concept is so cool and had so much potential to be great… but the execution failed. The crew are haunted by their pasts, which the ghost ship brings to life, but the audience is left a bit puzzled about some of these unexplained back stories. Character motivations are one-dimensional, and they are given some terribly cheesy lines of dialogue. The plot itself is unravels in a strangely haphazard fashion, without enough build-up or exploration of all the frightening possibilities of the ship that went to Hell and back.

[SPOILER] One bright spot is he villain, played by Sam Neill. Once the ship’s evil has fully possessed him, he becomes a demonic force with a scratched-up, eyeless face to match, and he succeeds at being genuinely creepy. I would have enjoyed seeing more of his descent into madness. [END SPOILER]

Perhaps my qualms with the movie are exacerbated by my disappointment that it failed to live up to the concept. I admit, the higher you set the bar, the farther you have to fall. Despite some of the great visuals and the glimmers of good sci-fi horror, Event Horizon ended up being sort of a fun, cheesy, sometimes-scary mess that had me laughing on occasion. 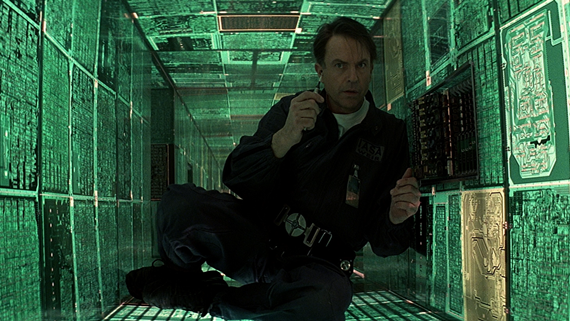 All in all, this was a fun movie, and I don’t regret watching it one bit. If succeeded in entertaining me, even if it didn’t succeed at becoming a truly excellent piece of sci-fi horror cinema.

Story concept: 10 out of 10 space ghosts

Execution of plot: 6 out of 10 space ghosts

Cinematography and visuals: 8 out of 10 space ghosts

Music and atmospheric sound effects: 5 out of 10 space ghosts

Do you disagree with my final verdict? You can view it and share your own opinion in the comments below. Watch Event Horizon now!