Pandora’s Pick of the Week: “The Spider” 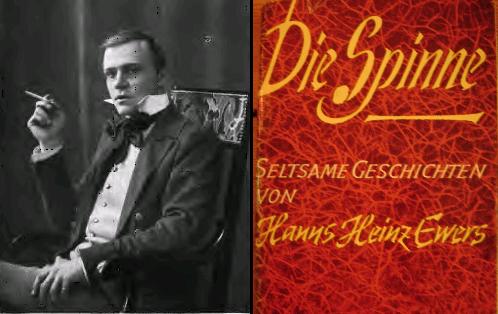 Background: Published in 1907. Ewers was a German actor, philosopher, and writer whose work is often shunned because of his involvement with the Nazis in WWII—though he didn’t agree with the anti-Semitic sentiments and had homosexual tendencies, which didn’t exactly jive with the Nazi ideal. Ewers was an important influence on H.P. Lovecraft, and “The Spider” is one of Lovecraft’s personal favorites.

What it’s about: “The Spider” is about a hotel room in which several people have hung themselves, strangely all in the same manner. In a desire to solve the mystery, one man decides to check into the room and monitor his experiences. What we get is a story in diary-format, much like my last Pick.

His stay begins innocuously enough, until he sees a woman with a window opposite to his, and they begin a weird yet captivating game of imitation with one another. As he becomes more obsessed with their game, he finds it difficult to fight against what deadly things she would have him do next, and he finally understands what happened to the other men who were caught in this dangerous web.

Why it will keep you up at night: It’s a story about potential insanity and what happens when you lose control over your actions and succumb to a puppet master’s will. I’m going to put on my geek hat for a minute and compare it to the Imperius Curse in Harry Potter—the ability to make someone do whatever you want them to, including kill others or themselves. The psychological twistiness of this story won’t trigger your gag reflex, but it will certainly make your skin crawl at the disconcerting possibilities of the femme fatal.